The front of the leaflet.

This is an updated and improved version of the “Why wear masks at protest?” flyer.  This new version has four 5.5″ X 4.25″ double-sided leaflets on one 8X11 Letter size page.  Print out the PDF and make double-sided copies, then cut them out to distribute at protests, actions, etc.   The text of the leaflet is printed below.

To download the PDF leaflet: Why Wear Masks Leaflet.

END_OF_DOCUMENT_TOKEN_TO_BE_REPLACED

Tags: masks, Why wear masks at a protest? Permalink
Leave a comment

The story of the unsung heroes: Black Bloc Brazil

Despised by many, hailed by some: the Black Bloc in Brazil uses its “performative violence” to draw attention to the everyday struggles of millions.

It was in the first weeks of the massive anti-government protests that started in June 2013 and shook Brazilian society to its very foundations that the Black Bloc made its first appearance on the protest scene. Demonstrations took place in dozens of cities across the country, but the black-clad youngsters who covered their faces and linked arms at the front-line of the marches, ready for any confrontation with the security forces, made their appearance mainly on the streets of São Paulo and Rio de Janeiro. END_OF_DOCUMENT_TOKEN_TO_BE_REPLACED

Hamburg, Dec 21, 2013–Over 8,000 protesters have clashed with riot police as they protested against the planned eviction of squatters from a popular social centre, and against the eviction of hundreds of Syrian refugees from their homes. The largely peaceful protest erupted following a baton charge, and use of teargas, and water cannons by the police. The protesters responded by building barricades, throwing stones, fireworks, and bottles. It is reported that over 500 people has been injured, and around 150 arrests made. END_OF_DOCUMENT_TOKEN_TO_BE_REPLACED 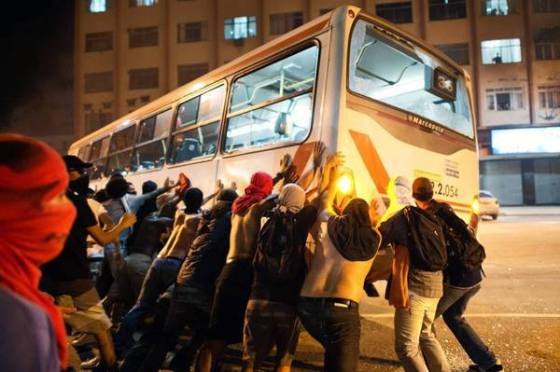 Brazil, June 20, 2013, protests. Demonstrators in Niteroi, near Rio de Janeiro, overturn a bus during protests. Clashes with police continued even as bus fare hikes were rolled back in two cities after protests.

When a tear-gas canister rattled around at Andrea Coelho’s feet, a masked young man picked it up and tossed it back at police. Right there, the kindergarten teacher decided she backed him and his fellow Black Bloc anarchists. END_OF_DOCUMENT_TOKEN_TO_BE_REPLACED

Egypt, Brazil, Turkey: without politics, protest is at the mercy of the elites

From Egypt to Brazil, street action is driving change, but organisation is essential if it’s not to be hijacked or disarmed

Two years after the Arab uprisings fuelled a wave of protests and occupations across the world, mass demonstrations have returned to their crucible in Egypt. Just as millions braved brutal repression in 2011 to topple the western-backed dictator Hosni Mubarak, millions have now taken to the streets of Egyptian cities to demand the ousting of the country’s first freely elected president, Mohamed Morsi. END_OF_DOCUMENT_TOKEN_TO_BE_REPLACED

More than 100,000 join demonstrations as students seize 30 polling stations to be used for presidential vote on Sunday 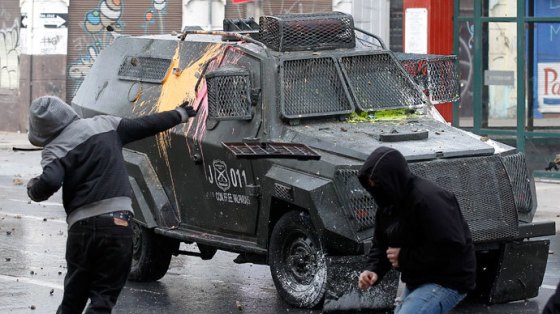